Mathis receives Service Above Self Award

2019 Service Above Self Award 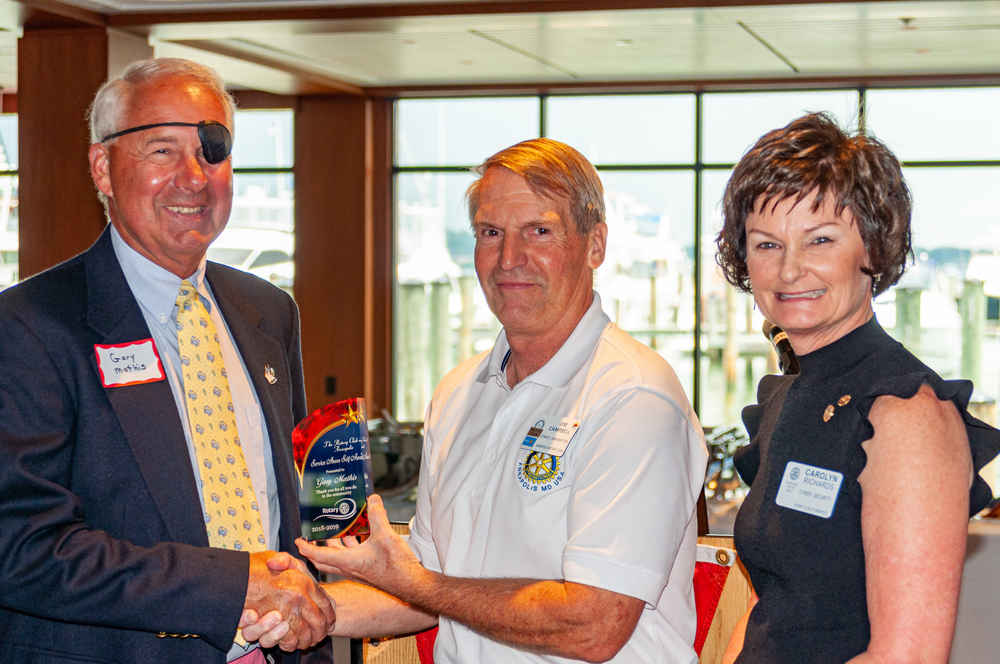 Annapolis, MD (June 20, 2019) – Gary Mathis, president of the Eastport Volunteer Fire Company, recently was honored by the Rotary Club of Annapolis with the club’s Service Above Self Volunteer Award for his efforts to support the community and the fire company.

“We are lucky to have Gary as president of the fire company, as a neighbor, and indeed as a friend,” says Rotarian Carolyn Richards who nominated him for the award. “He and his wife Christy have embraced Eastport in every way. The relationships that he has cultivated, not only with the Annapolis Fire Department, but also within the Eastport community, are the embodiment of volunteerism and support for our incredible community.”

Mr. Mathis is both a former professional and volunteer firefighter, having served in Garden City Fire Department and the Stony Brook Fire Department before he and his wife came to Annapolis and his joining the Eastport Volunteer Fire Company.

Before being elected president in December 2017, he realized the historic EVFC might have to disband because of low membership. He has worked tirelessly on community outreach and recruitment, increasing membership which continues to grow. He also has fostered a strong positive relationship between the EVFC and Eastport citizens, and developed strong ties with the leadership of the Annapolis Fire Department, Mrs. Richards says.

EVFD participates in Fire Prevention Month and Sprinkler Safety Day, bringing fire safety education to the community through activities for adults and children alike. Mr. Mathis has driven Utility 36 in the St. Patrick’s Day Parade, directed traffic at the 4th of July Parade, poured beer and spread word about EVFC at the Eastport-A-Rockin’, and set up tables at the fire hall for various community events. He assisted Santa Run Chairman, Annapolis Fire Department Capt. Muhitch, by hosting a children’s night at Station 36 as part of the Santa Run, which included Eastport children invited to watch holiday movies, drink cocoa, roast marshmellows, and visit with Santa. Donated toys supported the Santa Run mission. In addition, Mr. Mathis actively works with Eastport Elementary School to support Bike to School Day and fire safety lessons for the school children.

At the Service Above Self ceremony, he said while responding to a house fire in Eastport, he noted that one of the school students just that day had heard his lessons about fire safety and made certain that everyone in her family got out of the house in time.

Mrs. Richards said that Mr. Mathis has a working relationship with the Eastport Civic Association and the Maritime Republic of Eastport, with the EVFC receiving funds from the annual Annapolis/Maritime Republic Tug of War. The fire company has been awarded ECA grants, which will help secure apparatus equipment for the AFD, including a medic unit and a new engine that is to be customized for Eastport narrow streets. In January 2019 in conjunction with the AFD-identified needs, the EVFC purchased a new pump truck to be commissioned in the amount of $550,000. The truck will be delivered in January 2020. Mr. Mathis will continue to manage the build of this engine to ensure that EVFC gets it as requested and designed.

EVFC was founded in 1886, one year before Eastport officially became a town. It was incorporated into the network of Annapolis volunteer fire department in 1951. The fire company, at 914 Bay Ridge Ave., has eight pieces of equipment at the station. The mission is to promote community fire and life safety, through collaborative partnerships with the Annapolis Fire Department, and Eastport citizens, civic groups, and businesses.

Rotary’s Motto is Service Above Self